I hope everyone will be celebrating the new years like I am, 2013 was a huge year with loads of news and events going on within each week. And with the year coming to a close, it’s time for me to look back to see how far Gamepopper has come in this last year. END_OF_DOCUMENT_TOKEN_TO_BE_REPLACED

The winners of the Construct2 TouchJam have been announced both on Newgrounds and Scirra!

Unfortunately, I did not win, but I’d like to give my congratulation to the winners, as well as other entries that I enjoyed playing. I also like to say thanks to Tom Fulp for dedicating himself to write opinions for every single entry and organising the competition along with the rest of the Newgrounds Team and Scirra.

END_OF_DOCUMENT_TOKEN_TO_BE_REPLACED

As of writing I’ve just arrived home from the London. Microsoft’s Lee Scott and Simon Michael organised a two day (15 hour) hackathon, where we have the goal of making a simple and fun game in Unity for Windows 8, all part of the Windows Games Ambassador Scheme.

All this took place at Modern Jago, one of the Microsoft establishments for app developers to work on titles and get advice for their work. The layout of the place, as well as the design is very artistic and clever, and they have a lot of tech to play around with, including a 9 panel screened Xbox 360! 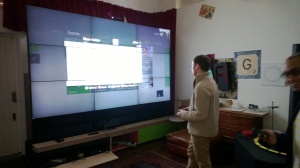 After an overview on what all the ambassadors have been up to and what games they’ve made, we also got shown what things Unity have that will make it possible for Windows 8 and Windows Phone 8 development.

Then it was on with the hackathon, we got into pairs and started building! I worked with fellow games ambassador Ben Beagley for our game. 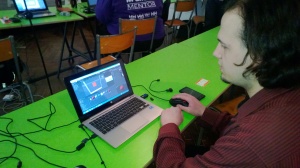