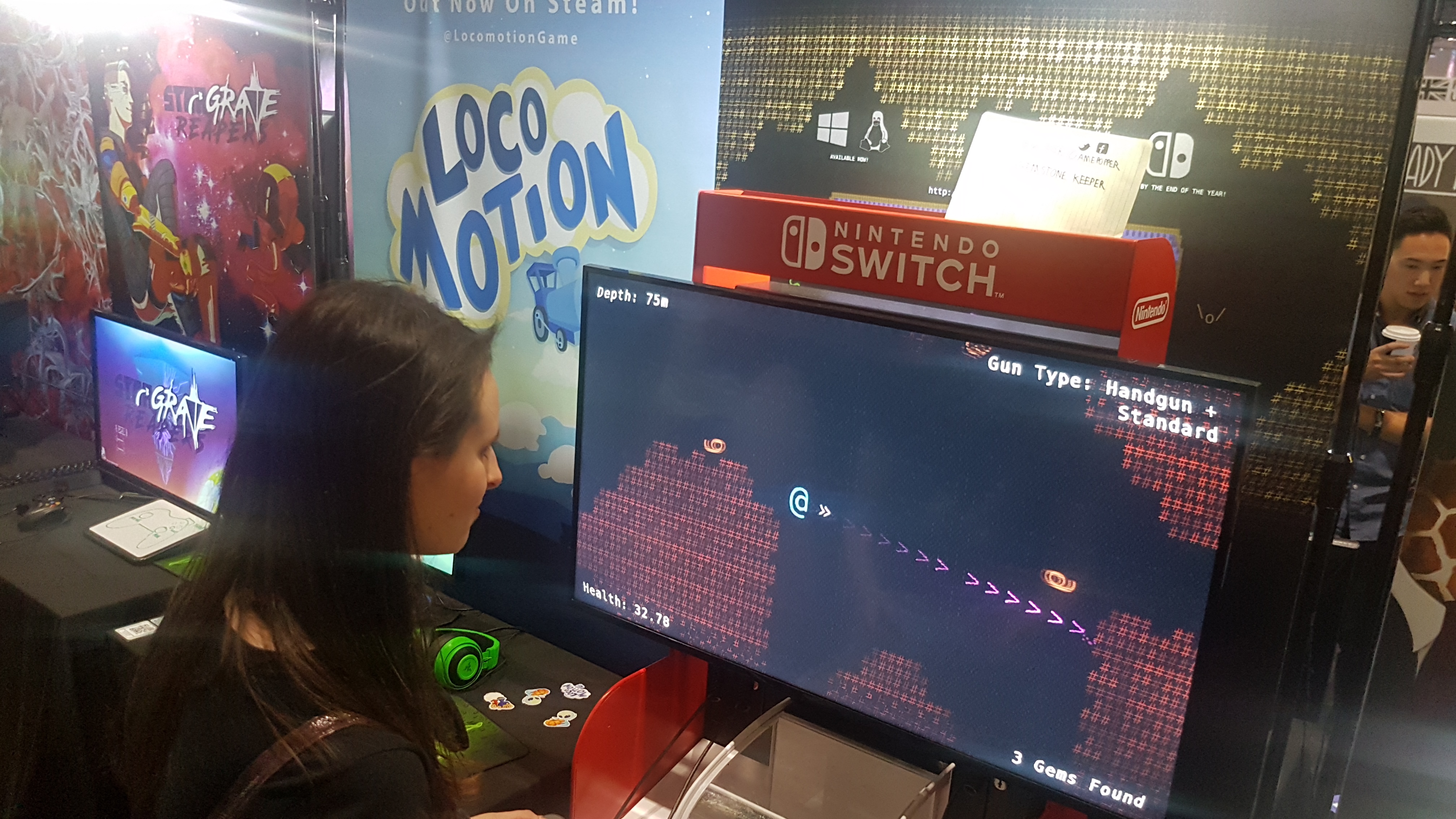 The day started off much earlier for me, unlike the Birmingham NEC is a half-an-hour drive, London was a two-hour train journey at best (not including the journey on the DLR from Euston) so my first day started off at 6am. What didn’t help was finding out from the driver that there was a signalling fault that was cancelling a number of trains going into London, but by some miracle, my journey wasn’t affected at all.

One thing I did find strange was getting my exhibitor wristband and getting in. For Insomnia, there was a reception desk specifically for exhibitors and staff to get their things, but exhibitors at the ExCel had to go through the long and gated lines and get their wristbands at the same place that the regular attendees used. It was a mild inconvenience that only made carrying my bags into the expo hall a bit more exhausting, and fortunately, on the other days, I was able to either bypass the long part of the gated queue or go in through the contractor entrance. Bag checks were more mandatory too, so I tried to keep my bags in the expo hall for most of the time I was there.

From the time Insomnia had ended, and EGX was around the corner, I had been in touch with Rob Kinder from Payload Studios, and one thing that was brought up as a possible opportunity was for Gemstone Keeper to be shown on an official Nintendo Switch demo unit. This had the advantage of being easier to set up, as well as look a lot more official. Payload Studios had planned to rent one to show off Terra Tech on the Switch, so there was a chance I could use one too. I was told the day before that there was one waiting for me, and as I arrived onto the Tentacle Zone, you could imagine how amazed I was at what was in my area:

It was a great spot, and after setting up the unit to show my game I had to get a photo, so I asked one of the devs from Cave Monster (who I previously met at Insomnia, and were showing Inspector Waffles next to me) to get a photo of me next to my game. Thursday was pretty quiet, more so than the first day of Insomnia. This was mostly believed to be because it was a typical workday, and it was a week or two before half-term holidays so most kids weren’t going to attend (although I did spot a group of kids who were there on a school trip, making me wish my school did the same thing when I was little). As it was getting slow, I decided to post the photo of myself to the IndieGaming subreddit, to share a personal achievement of mine, making a game for a Nintendo console. After an hour, it was getting some really positive comments, and someone suggested I post it to the Nintendo Switch subreddit as well. An hour or so more passed, and the 40 – 50 upvotes suddenly turned into a few hundred upvotes on both posts, with mostly positive comments congratulating me, asking about the game or developing on the Nintendo Switch. What surprised me the most was that over the Thursday (and even Friday) had a bunch of players who came over to play Gemstone Keeper, recognising me and saying how they wanted to check the game out because they saw the post on Reddit (I didn’t ask which one on any of them though). It’s funny how something I posted to share as a personal accomplishment ended up getting my work more attention than my usual social media posts. 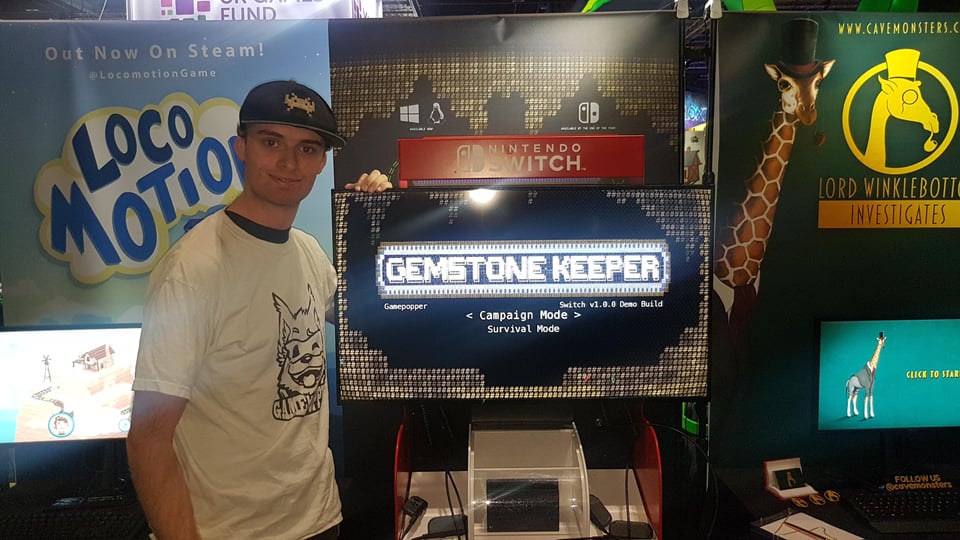 Friday was somewhat the same as Thursday, perhaps a tad more people showed up, but Saturday was the biggest day. Supposedly it was completely sold out, with over twenty thousand turning up on that day alone. With the first hour being for early entries, most people wanted to queue up to see Cyberpunk 2077 gameplay or whatever was going on at either Sony or the other big publisher stands, with the indie spaces gradually getting more people. Gemstone Keeper would get people coming up individually or in pairs, unlike Insomnia where it was usually either one person who wants to play or groups of four, so I usually had a quick idea of whether they wanted to try the Campaign Mode (Single Player) or Survival Mode (Multiplayer), albeit with slight confusion because the demo unit was set up with four hardwired joy-cons, and most of the time players were playing with a dual joy-con set up. 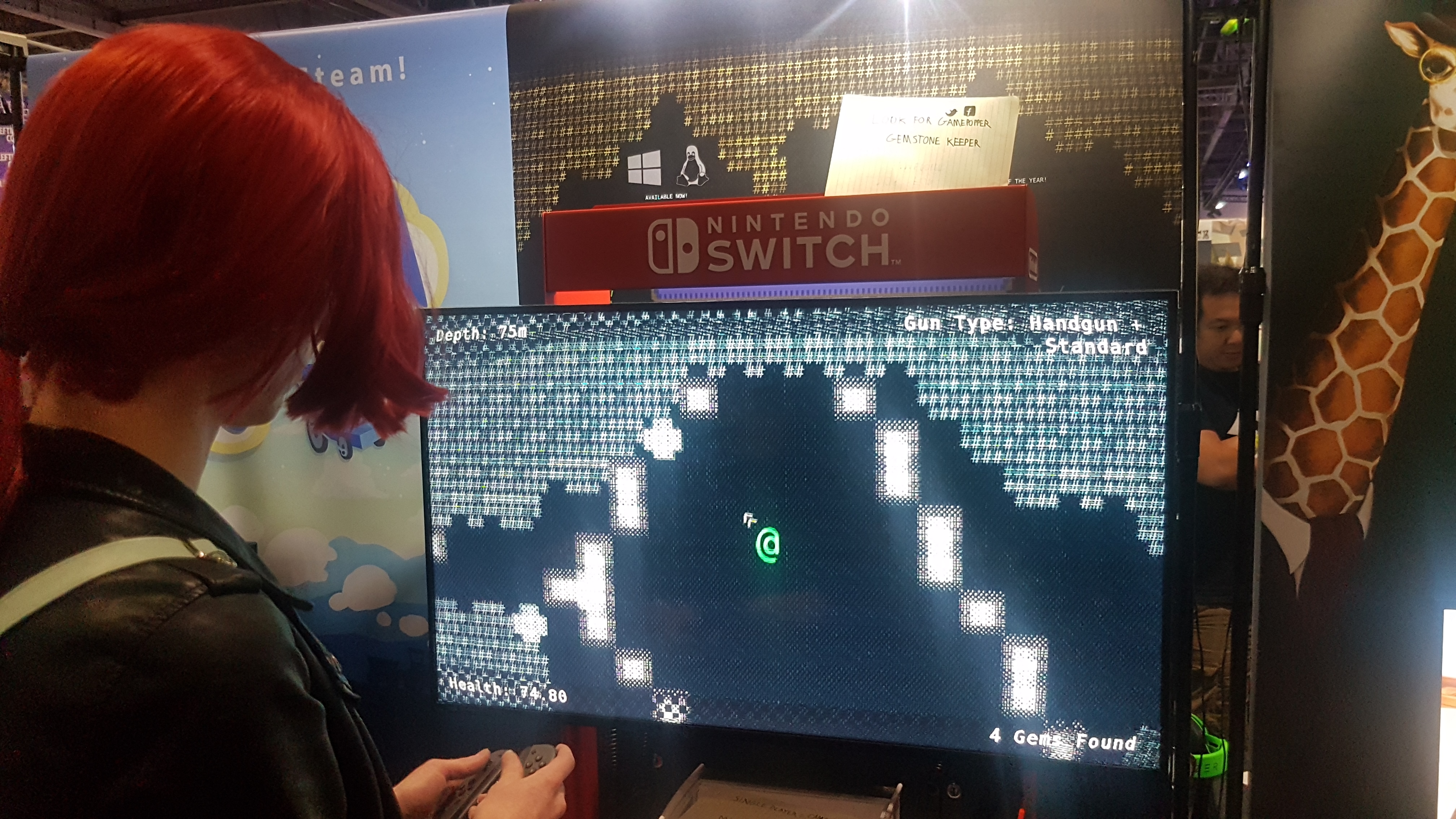 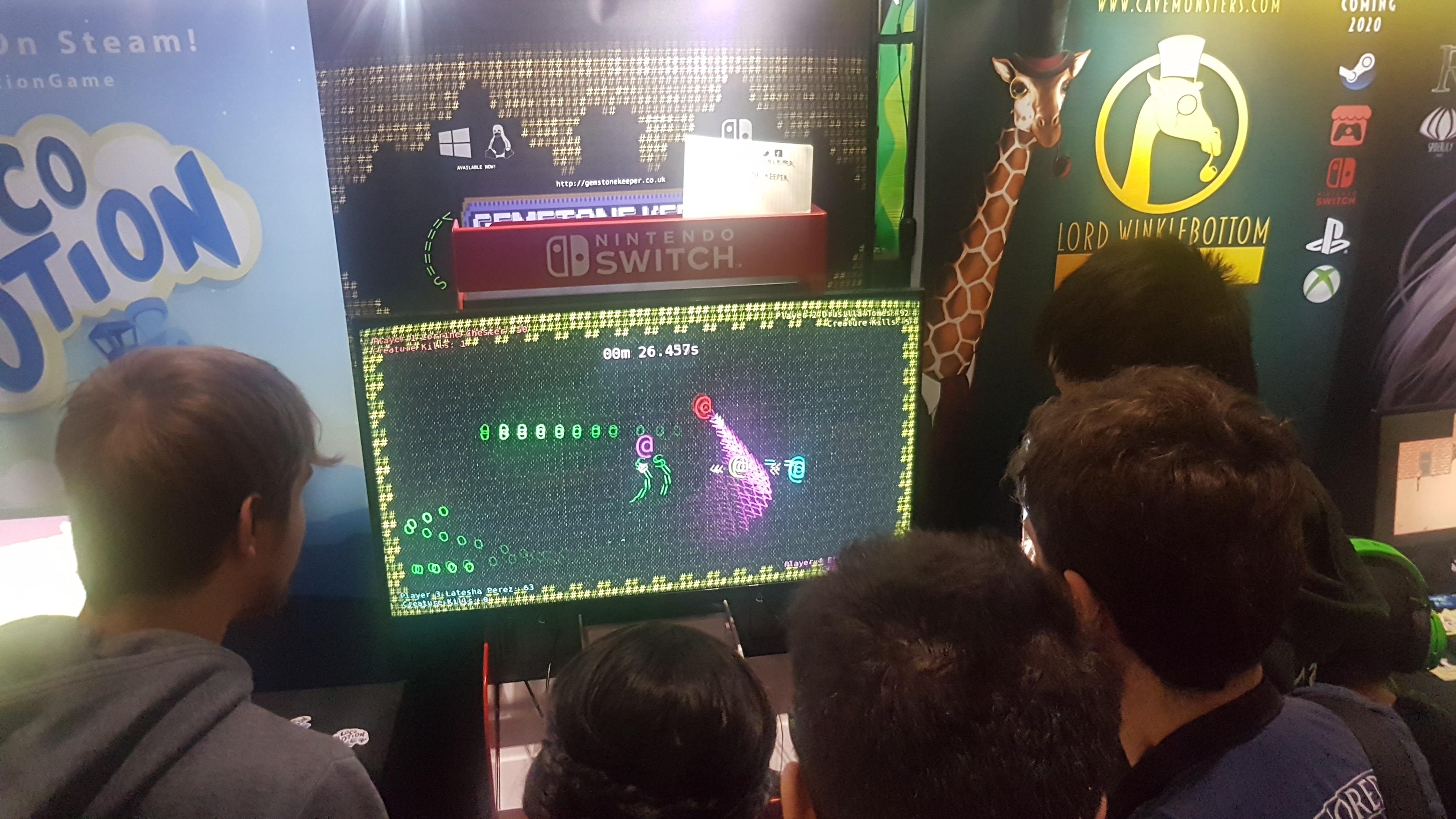 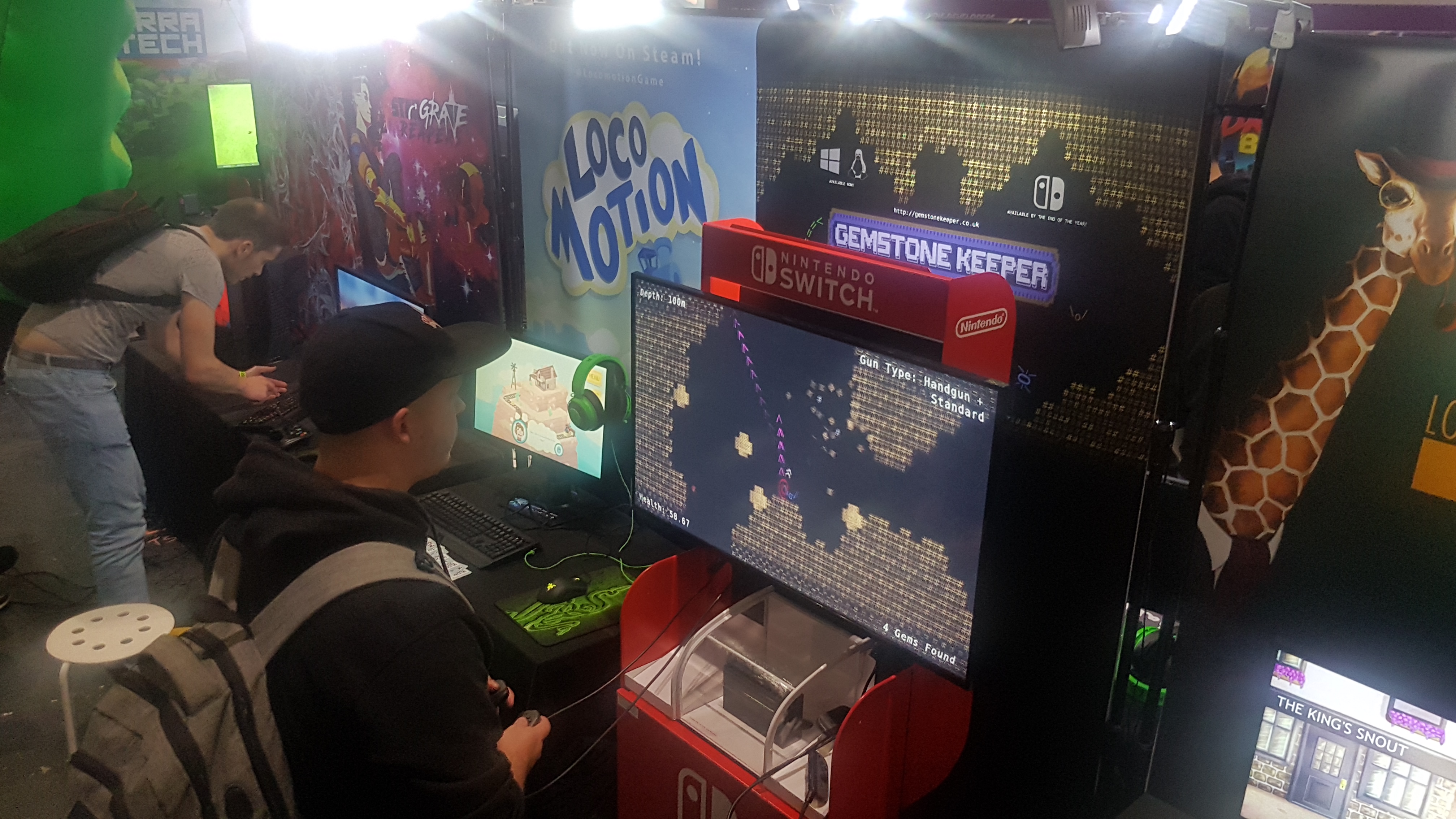 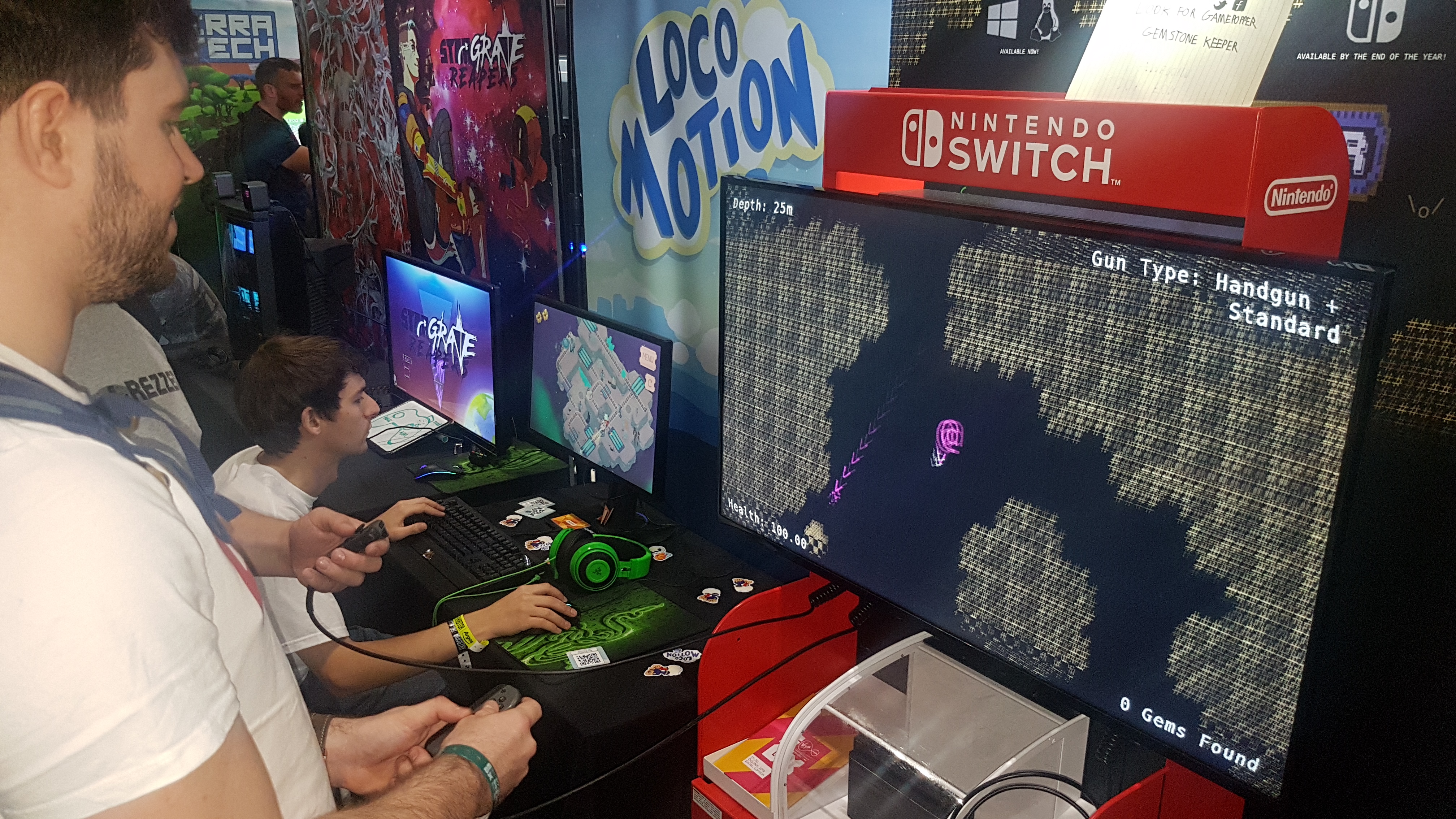 Showcasing the game was made a lot more manageable and less stressful thanks to the other developers I was in the Tentacle Zone with. The Charlotte and her partner from Cave Monsters (who were showing their point-and-click adventure game, Inspector Waffles), as well as Andrew from Spilt Milk Studios (who was showing a twin-stick space shooter called StarGrave Reapers), I had known previously for some time on social media, and it was nice to get to know them better in person. Rosie from Polyfox (who were showing their puzzle game was particularly nice to have around, having a little ice-breaker game so she could get to know all the devs and encouraging players hanging around to try out the other games in the area whilst they were waiting to try out their own. Quang and Viet from Asobi.tech were showing their game MaoMao Castle around the corner, and of course, there were the folks at Payload Studios on the inside area who were on hand for any technical help.

There was one nagging issue I had with showing the game however, the crashes. Oh god, the crashes. Having your game crash on the expo floor is an inevitable occurrence to have, regardless of how big of a game developer you are (Rob mentioned playing Gears 5 and having the game crash on him). It doesn’t make it any better to see someone play through your game, only for them to suddenly encounter a system error message appears, requiring a reset. I’m not sure which one was worse though, having the game crash twice in a row when Dave from Blockships paid a visit to the Tentacle Zone or seeing the game crash on someone when they were about to reach the final level of the demo. Whilst I counted 13 crashes (and one lock-up) during the entire four days, most of the time players had a good time playing it. There was definitely a lot of intrigue into the ASCII aesthetic, as well as a lot of impressed reactions when asked how the game was made (especially after I tell them that the game was made in my own engine, and mostly ported to the Switch by myself). Like with Insomnia, there were some pretty funny moments surrounding people’s reactions to Gemstone Keeper’s graphics, including a common exchange that took place regarding one of the early enemy creatures in the caverns:

Player: “So are those sixes or nines?”

Although most of my time was observing and helping those trying out Gemstone Keeper, I did get a few opportunities to wander around the expo hall and find things to try out. Of course, I checked out a few of the other Tentacle Zone games such as LocoMotion, StarGraves, MaoMao, Recompile and Drive Buy, but I also looked around and checked out a few other indie areas. In the UK Games Fund section, I enjoyed both the on-rails music rhythm shooter Aareo 2 and the atmospheric Forgotten Sea (which one of the developers was Windows Game Ambassadors alumni Adam Boyne!). In the Leftfield Collection, there was a lot of hype for SkateBIRD, but I also got to play the Star-Fox inspired on-rails shooter Ex-Zodiac for the first time! In the Rezzed Zone, I enjoyed a rhythm bullet hell game called HyperCore, but the big highlight had to go to Tony Slopes, a game where you can race downhill on a humpback whale. I could have tried some of the bigger titles, but the prospect of waiting in a long line for a short demo or watching gameplay footage was less appealing considering I was needed back in my own stand.

There is a game where you ride a whale.

EGX overall was a hell of an experience, there was a lot more indies spread out and a greater distance to explore. London is much pricier of an area though, and I had to stay overnight in a hotel (Could have stayed at an AirBnB, but I’ve had good experiences with a few Travelodges in my travels). Having a proper demo unit was a lot more secure and manageable compared to having a table to hide stuff under. I’m not sure if I’d say EGX is better off in London, considering that the city has three or four-game events throughout the year whilst Birmingham has one, Manchester and Blackpool have one each, Brighton has one ect, but if you’re willing to put past the travel and prices, there is no better place in London to host a games expo of EGX’s size other than the ExCel centre.

Many thanks go to Payload Studios for running the Tentacle Zone, as well as Nintendo for providing the demo unit so I could show Gemstone Keeper in its glory and the rest of the indies who made the experience enjoyable. Also many thanks to everyone who turned up to play or showed their support!

One thought on “The EGX Report”