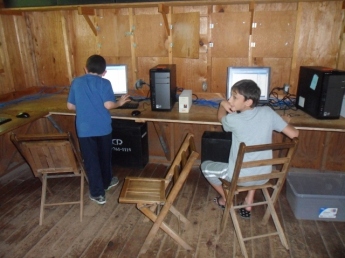 Sorry for the long absence, I’ve been a bit busy unpacking and preparing for another upcoming year of University. As some may recall a few months ago, I got offered a place at a summer camp in America and in mid-June I setted off for America to begin my two months of work. I had a great time meeting a large variety of people young and old and tried out some new things like boating, motorbiking and camp fires. I also worked in the Computers as each staff member taught a Science. There were three of us working in computers and we were allowed to run our own courses, so I figured why not teach them how to make games using programming.

And so the Games Programming Science Course was created! On each two weeks I got a group of enthusiastic campers aged between 7 -15 interesting in making games, and while they had some difficulties understanding some of the codes and functions I was able to help them make some interesting games, including the original Pong! The video in this post shows some of the examples actually made by the campers…

I am very glad to have gone and experience working at the camp, as well as being able to travel around America afterwords, such as New York, Washington DC, Delaware and New Jersey. It was a great experience and I would love to go again, especially since I have experience in teaching now!

But at the moment I’ve got work catch up on and University to prepare for.

Talk to you soon!

One thought on “Back from America!”